This is a continuation of my notes from my 2014 ride from California to Alaska. My previous post describes my journey so far from San Jose, California to Vancouver, Canada.

I took a break in the journey at my cousin’s place in Vancouver. His apartment in one of the high rises at downtown had splendid views of the Pacific Ocean, Vancouver’s famous Stanley Park, West Vancouver and the dramatic sky covering them all. With such a view and cloud cover I had to take some timelapses.

I think I got some good ones.

With a plan-as-you-go trip and its flexibility comes the downside of a sense of overwhelm when you slip away and try to plan the next step and realize that there are too many moving parts in this machine, too many variables in this equation.

I spent the next day and a half among good company, great food and views worrying about the navigation system that wasn’t working as I had hoped, the energy bars that were causing a tummy upset, the heated gear wiring that needed done on the bike, the route planning that was critical from here on, the weather that threatened to wash out my rides, planning for the return ferry from Alaska to either Bellingham or Prince Rupert and working out the emergency system on the inReach Explorer that should have been done before I set out. Quite the opposite of the relaxed plan-as-you-go I was hoping to do.

I ditched the inReach Explorer for navigation and bought a regular car GPS. I gave the Kind bars to my relative and bought another bunch of energy bars from MEC. I bought a pair of base layer shirt and long johns for the cold that was awaiting me in Alaska. I decided to work out the ferry details and the inReach tracking on the road. 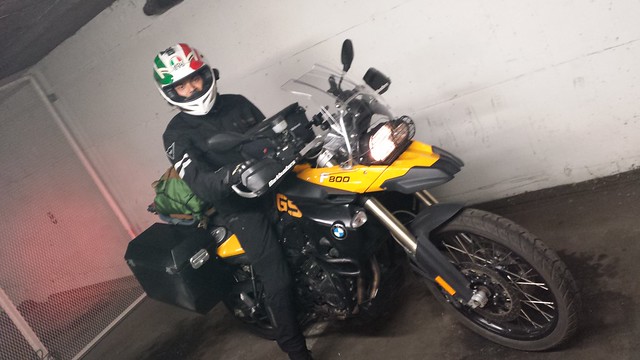 Around 4pm on September 1st I decided to press forward. Cache creek was just about 260 miles from Vancouver and riding out today meant saving an extra day of riding.

I bid adieu to my cousin with the hope that I might get to visit him again on the way back if I take the ferry to Prince Rupert. The highway from Vancouver was wide and fast and I soon reached Hope where it gained in elevation and started raining quite a bit. It even got cold. My rain gear performed well and I didn’t have to use the heated gear.

It rode all the way to Kamloops where I stopped for gas and food. I met some older guys riding from Alberta to the west coast. They were riding big Suzuki cruisers and wearing leather jackets and chaps with open faced helmets. They definitely had to be locals. They wished me luck on my trip and cautioned me about riding in the night. The deers, elks and moose have a habit of stepping out in front. I rode to Cache Creek gingerly and quickly went to sleep at the motel. It was a tiring day. 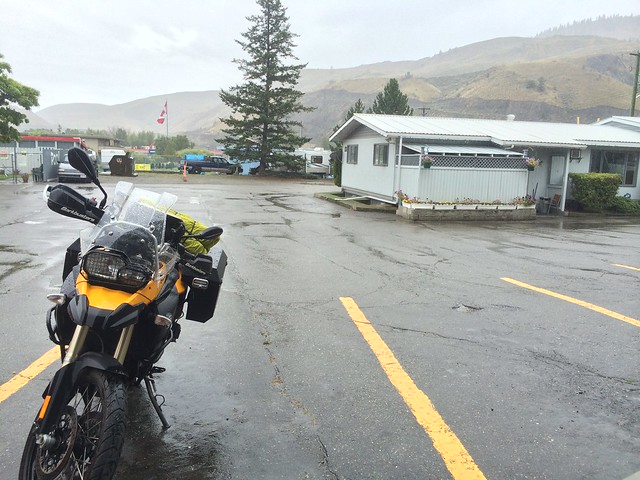 It was raining steadily when I woke up. The cloud covered sky was grey and the streets were wet. My bike was dripping wet. Nevertheless I woke up, prepped and grabbed breakfast at a family diner down the street. The weather forecast was gloomy and the motel owner remarked more than once that this isn’t a weather to ride in and wanted to know if I was staying another day. I was ready to leave by 11am. Chancing on a slight drop in the rain I got onto the bike and started off for Prince George.

My decision to ride was validated when I saw at least 4 other bikers on the road in less than 5 mins. The route today was around 250 miles on Hwy-97, The Cariboo Highway, The Gateway to the North.

The highway was in good condition and had one, two or sometimes even three lanes. It rained for another 2-3 hours and I didn’t bother stopping anywhere. It did get cold and I had to use the heated gear. Unfortunately switching on the heat in both the jacket and gloves together kept overloading the temperature controller which would shut them both off. I was forced to use just one of the two and I chose the jacket over the gloves to maintain core temperature. Need to sort that thing out soon. 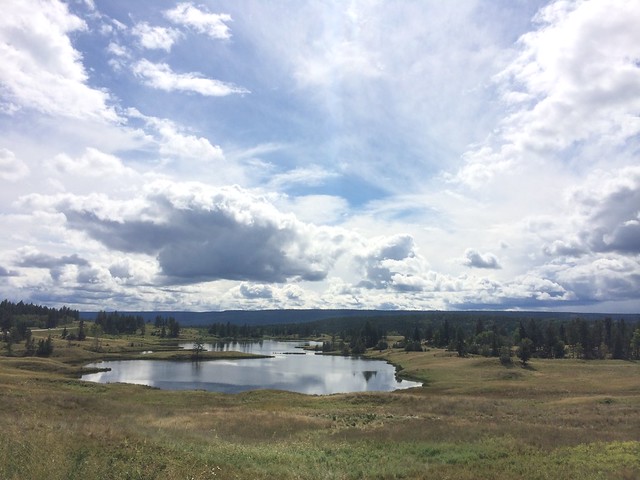 By around 2pm I was out of the cloud cover and I began to pay more attention to the beautiful British Columbia around me. It’s a very green mountainous region. The spotted blue skies added great contrast. The Cariboo Highway winds through these mountains, valleys, forests and very large wild meadows. There were many water bodies varying in size from pools, ponds, lakes, streams to rivers. Most of them had some sort of human settlement next to it. Small shacks, houses, ranches, villages, towns and cities depending on how large the water body. None of this however looked very industrialized. It had a pleasing rustic charm to it like straight out of a Brother Grimm’s fairy tale. 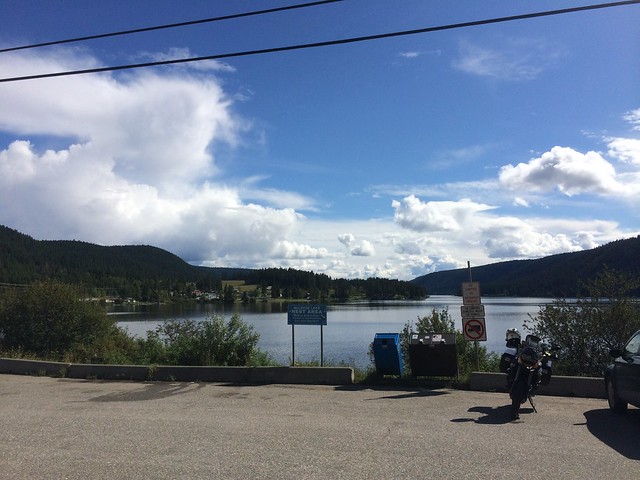 This route had some of the prettiest rest areas I have ever seen. Each one with spectacular views of mountains, lakes and forests. 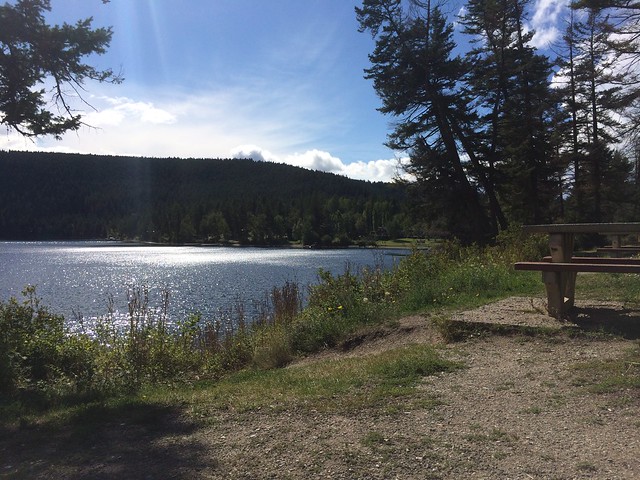 I stopped at Quesnel for lunch at the local Denny’s and to fill up gas. I met another rider on a F700GS who was moving from Prince George to Vancouver with family in tow in a car. We spoke for a while and compared our rides. A sudden hail shower passed over us as we talked.

I reached Prince George around 6:30pm and checked into the cheapest motel I had found when I had set out earlier in the day. I was glad I got here before dark with time to just relax and do nothing. I am now slowly beginning to feel the fatigue of the trip. It will only increase over the next few days as I don’t plan to have any rest days until I reach Anchorage.

The loneliness of the trip is also slowly kicking in. I can get by without company most of the times. But there were moments when I could have done with a hearty talk with anyone. There were other riders on the road. But all riding in the opposite direction who at least wave when they pass me. I had turned off the music to focus on the rain ride. Maybe tomorrow I will listen to some music and hopefully ease things out a bit. For tonight I turned on the idiot box for company till I fell asleep.

I was a little bit excited about today’s ride. The weather was supposed to be good. No rain! I looked forward to riding without the rain gear. I wasn’t disappointed at all as clear skies greeted me when I stepped out of the motel. I had a heavy breakfast at the local Denny’s restaurant and set out.

The ride started out a bit cold and the heated gear kicked in keeping me warm. BC-97 continues through the wild northern British Columbia. The roads get narrower and lonelier. I don’t see many vehicles. Mostly logging trucks, oil trucks and smaller pickup trucks. Hardly any cars. 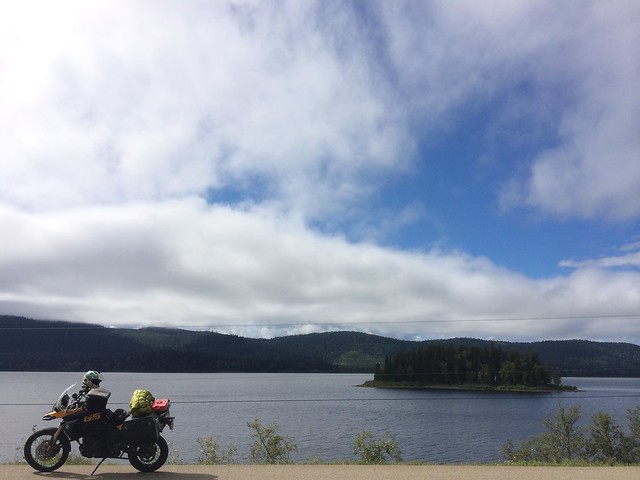 Yesterday’s theme is continued. Small mountains with pools, ponds, lakes and rivers feeding the forests, wild meadows and the few towns and villages lying amidst. 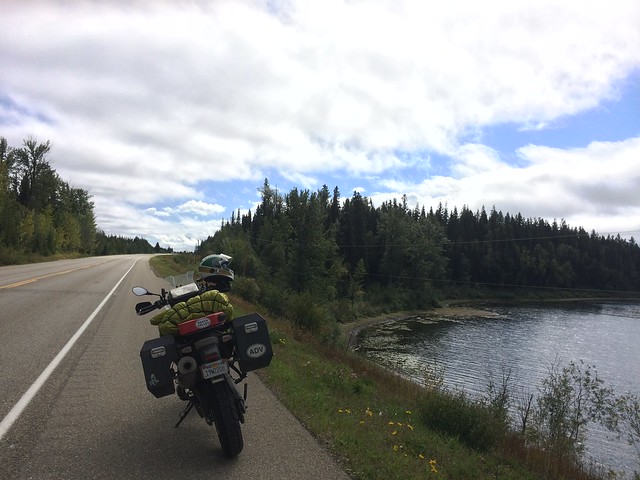 I soon found myself running short on gas. I pulled into the first gas station I found. They didn’t have 91 octane that I use. I gambled and rode another 40 miles to the next village where they didn’t have it either. I filled up 87 octane as that was the last gas station for the next ~100 miles. Luckily my bike did well with it. At the gas station I got chatting with the owner who owned a Harley. He was very excited about the Canadian Rockies that lay ahead of me. He said that I will get to see the foothills soon and the gentle rolling roads will have ample pull offs for photo ops. 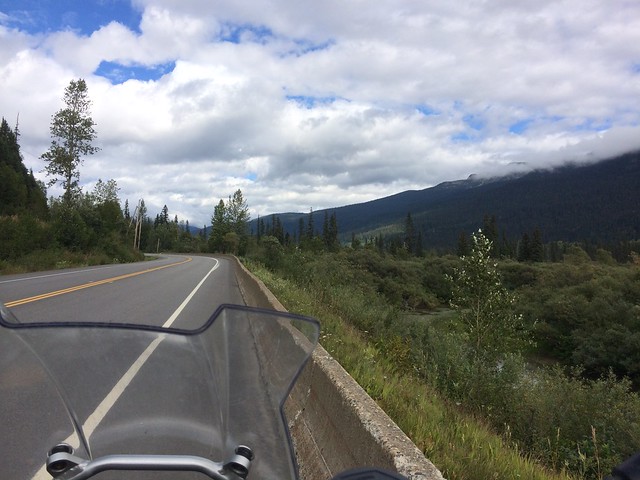 I stopped a few times on the way to take some photos of the majestic mountains. 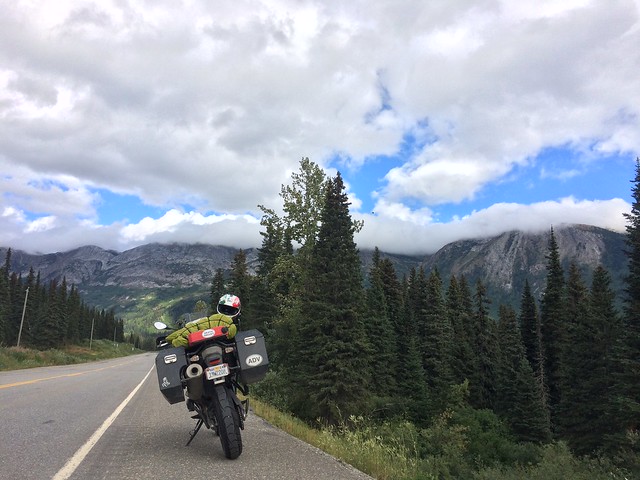 There was some cloud cover which hid the mountain tops but it was warm! Finally after about a 1000 miles of riding the temperature finally went above 60′. It felt great and brought about a cheer I was missing yesterday. The ride was fun again!

The warm weather continued after the Rockies. The skies opened up some more and the mountains gave way to vast plains. With so much natural beauty all around me and something slightly different and better framed at every turn I began to wonder if am becoming numb to it and not appreciating the magnanimity of the great white north.

Not wanting to stop too often I took time-lapses. This was a good idea which went bad. My set up and the process was not suited for motorcycle riding and the time-lapses of the ride turned out to be quite jarring and lousy. This is one of the better ones. I took many useless timelapses over this trip. Hopefully I will do a better job the next time around.

I reached Dawson Creek around 5pm. 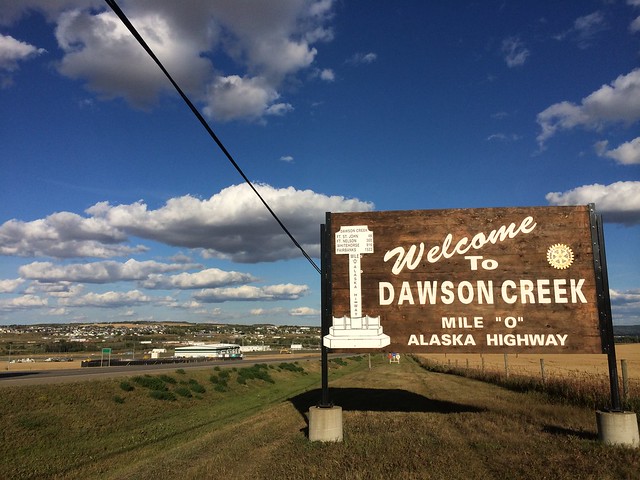 Dawson Creek is the starting point for the Alaska Highway. It has taken me around 1900 miles to reach mile 0 of the Alaskan Highway. It was built in 1942 by the United States Army Corps of Engineers to provide a quick supply route to the Alaskan frontier. It was later strengthened and fortified by a wave of civilian engineers who spent more time and resources making it better. The Japanese provided a threat to US soil as they were just under 2000 miles from Alaska. I followed the Alaskan Highway to Fort St. John. 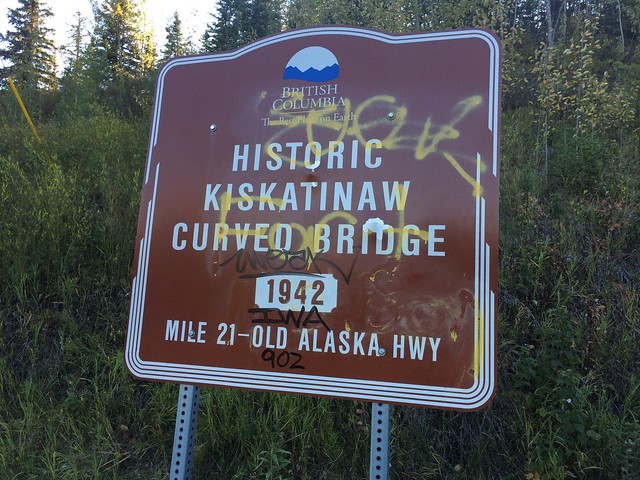 Along the way I took a detour to check out an old bridge constructed by the engineers. 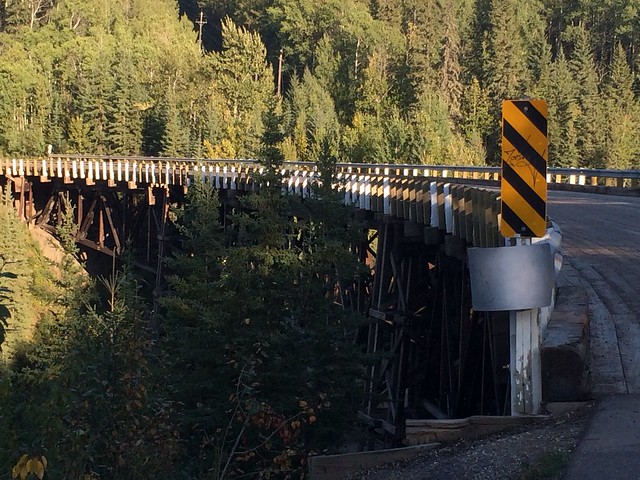 It was a wooden bridge which curved. 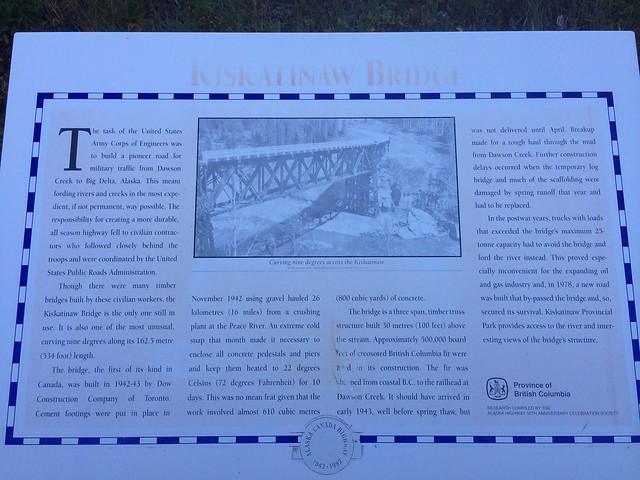 Apparently the first of its kind in Canada and it was pretty. 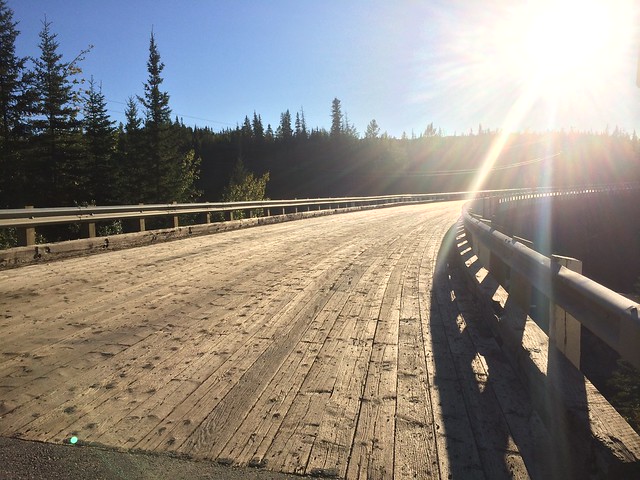 I reached Fort St John around 8pm owing to a delay due to workers repairing another bridge, this one was all steel with no Tarmac and was being welded at places. I had to wait an hour and half for my turn to cross the bridge. 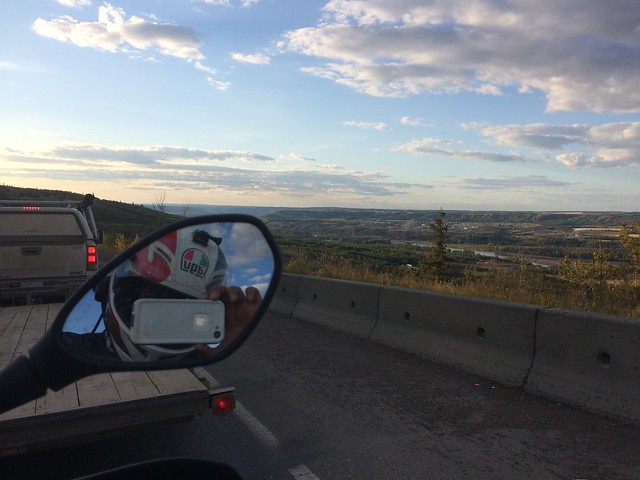 Even though I was tired I didn’t mind waiting as I sat on the bike and stared at the orange sunset glow on the mountains and the river flowing between them. A good day today was.

4 thoughts on “The Alaskan Odyssey – II” 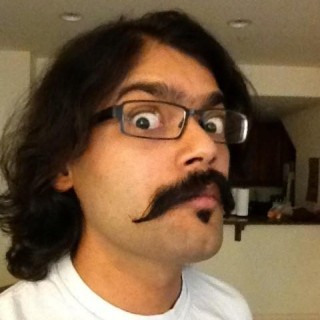